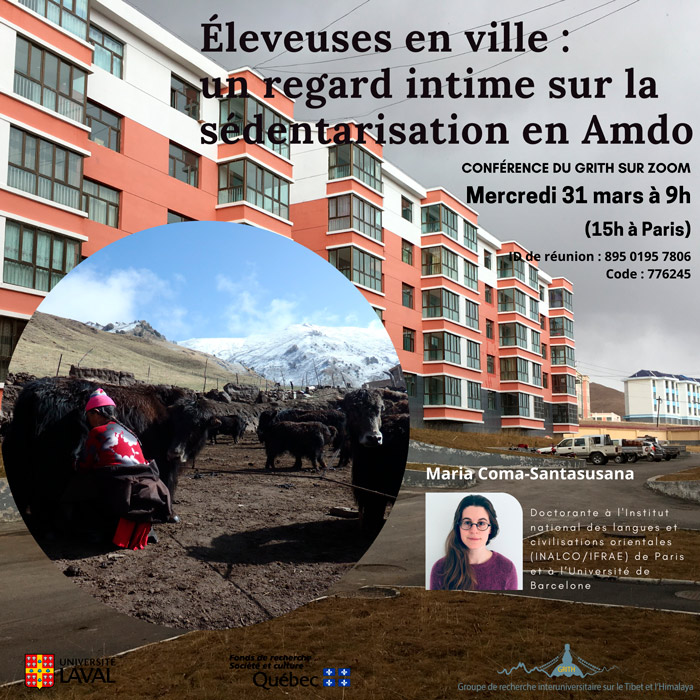 Cycle of conferences of the GRITH

"Women Breeders in the City: An Intimate Look at Settlement in Amdo".

Maria Coma-Santasusana is a doctoral student at the Institut national des langues et civilisations orientales (INALCO/IFRAE) in Paris and at the University of Barcelona. Her research in Amdo (northeastern Tibet) focuses on the relationship between nomadic pastoralists, their animals and the environment.

Summary of the conference

Summary of the conference

The pastoral regions of the Tibetan plateau are the object of a modernization project on the part of the Chinese state which, for several years, has taken the form of programs of sedentarization of its nomadic pastoral populations in urban and peri-urban centers. This process of urbanization, based mainly on sedentarization but also relayed by new educational and environmental protection policies, is disrupting the relationship that nomadic pastoralists have with the living beings in their environment.

Based on a field survey conducted between 2016 and 2018 in a pastoral district of Qinghai province, this presentation chronicles the daily lives of two women herders as they move from the pastures to the district capital, offering an intimate look at sedentarization. Particular attention will be paid to the relationships that these two women have with other living beings - domestic and wild animals, plants, mushroom-caterpillars - as well as to the way in which these links are undone or strengthened during the protagonists' transition from a pastoral to an urban lifestyle.