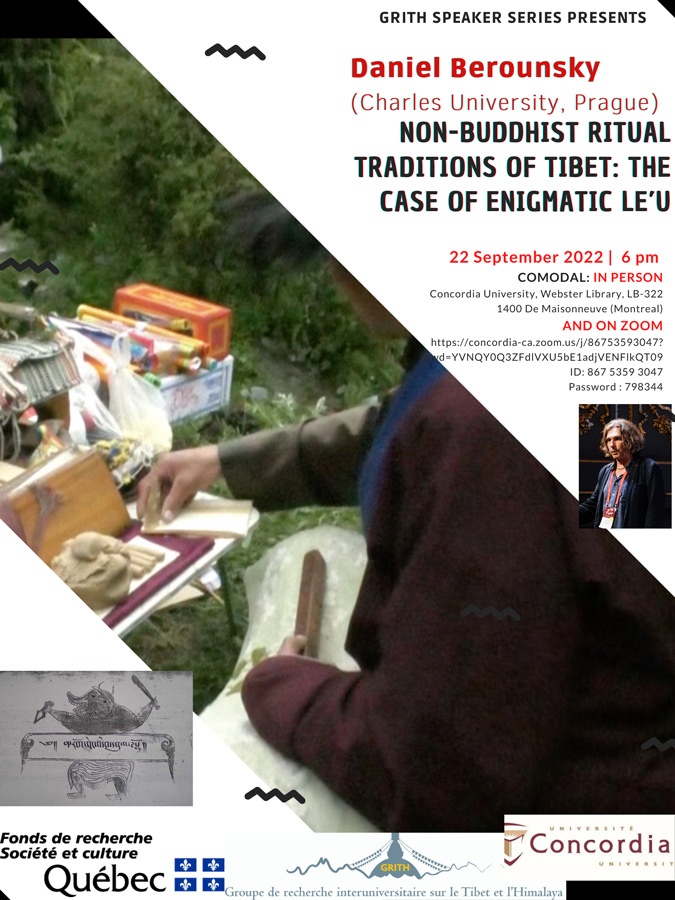 Buddhism spread in Tibet at a time close to the emergence of Tibetan script (7th century) and the formation of the Tibetan Empire, and was officially supported by the ruling classes from the 8th century onwards. Nevertheless, we have preserved written non-Buddhist ritual texts dating from the time of the Tibetan Empire (these are mainly texts from Dunhuang and the Gathang Bumpa Stupa).

The influence of these little-known non-Buddhist rituals, however, is imprinted in contemporary Buddhist rituals across all sects of Tibetan Buddhism. These include rituals of ransom offering (glud), summoning prosperity (g.yang 'gugs), the ubiquitous smoke purification (bsang), etc. Non-Buddhist rituals were firmly linked to the recitation of a myth about the origin of the ritual that gave them meaning. These myths disappeared in Buddhist versions, and the rituals were often simplified and artificially linked to key Buddhist concepts.

This talk will focus on a non-Buddhist ritual tradition from the forested north-eastern edge of the Tibetan Plateau that until recently used the recitation of origin myths. This tradition was known as leu (le'u). It disappeared after the Cultural Revolution in China, but we have preserved hundreds of ritual texts scattered in the households of this area in the Minshan Mountain Range. However, the term leu is familiar to Buddhist texts, and even more so to texts of the monastic Bön tradition from after the 10th century. It appears most often as a designation of specific deities (le'u lha), but secondarily also as a designation of a particular tradition and a name for ritual specialists.

Although the term leu means ‘section,’ ‘chapter in a book’ or ‘part of a ritual’ in Tibetan, there are references in medical texts to the term also referring to ‘foetus.’ I will try to argue that leu deities were spirits associated with fertility who were believed to bring offspring to humans. Although it seems likely that the core of this tradition originated in the eastern part of the Tibetan Plateau, references to leu in Buddhist and monastic Bön texts suggest that their influence was not limited to this geographical area even centuries ago.